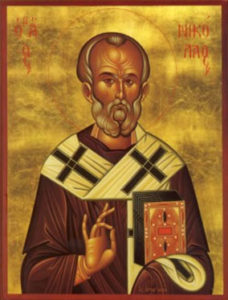 Born during the Third Century in Patara in Modern day Turkey, Nicholas was raised a devout Catholic and at a young age experienced the tragic loss of both his parents. Distributing his inheritance among the poor, the sick and the needy, he dedicated his life to God. As a young man was consecrated Bishop of Myra. It was there that he died 6th December 343.
Over the centuries many stories have been told about the life of St Nicholas and his many miraculous and inspiring works. During his life time St Nicholas was known for his generosity of heart and pocket. He attended the Council of Nicaea, the first ecumenical council of the Church. During which he strenuously defended the faith and upheld the dogma of the Most Holy Trinity against the untruths of Arius, who denied the divinity of Christ. Stories are told of how he saved the people of Myra from famine and how he saved the lives of three young men by grabbing the executioner’s sword. He built many churches and cared for his people as a true shepherd; protecting them from evil and preaching the gospel in ways that people easily understood. Even before he died, he was revered as a saint by many; sailors had already claimed him to be their patron saint and brought the stories of his life throughout Europe. 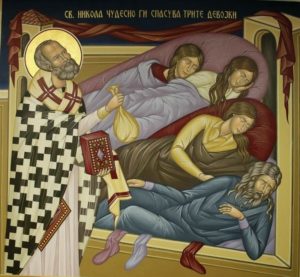 His reputation as a saint spread quickly after his death and he became one of the most well-known and honoured saints in the early church. Many churches were built and religious art commissioned in his honour. Many of the favourite stories of St Nicholas came about after his death. At the heart of these stories was his generosity, care and protection of children and young people. Although he is listed as the Patron Saint of many groups, he is particularly known as the Patron Saint of Children.
His relics were moved to Bari in Italy in the 11th Century where they remain today. A large portion of relics were also moved to Venice. Ireland lays claim to the relics as well, stories abound that the relics were brought to Jerspoint in Co. Kilkenny by two knights from the Crusades. A tomb stone with the image of a bishop and the heads of two knights is still visible in the grave yard of the ancient monastery.
Since the early days of the Dominican Order devotion to St Nicholas is found in our chants, prayers and the many chapels built in his honour. In more recent years it is the Dominican Friars in Bari who are the custodians of the Relics of St Nicholas. They continue to draw off the miraculous liquid called ‘Manna’ from his tomb on May 9th. His feast day is also the day on which St Thomas Aquinas has his profound mystical experience which caused him to stop writing. We draw inspiration from St Nicholas, for whom Christ was at the center of his life and ministry. He put this faith into practice in his loving care of others and the preaching of the Gospel.