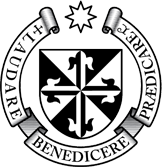 You are very welcome to the website of our community of Dominican Friars (Order of Preachers) based in Dundalk, Co Louth, Ireland. We are a mendicant Catholic religious Order founded by a Spanish priest, St Dominic de Guzman, in 1216. Under the powerful patronage of Mary, Mother of God, we are called by God to preach with joy the Good News of the Gospel of Jesus Christ and the truths of the Catholic Faith, so that all people may have “life and have it to the full” (Jn 10:10). Our Order is made up of friars (priests and brothers), contemplative nuns, apostolic sisters and laity. We come from a variety of backgrounds and ages and we are involved in a large number of varied ministries around Ireland. Our life is shaped by prayer, study and contemplation as we live out the evangelical counsels (poverty, chastity and obedience)in imitation of Our Lord Jesus Christ. Our community of Dominican Friars is based in our Friary and beautiful church of St Malachy based at the Crescent, Anne Street, Dundalk, Co. Louth. If you wish to learn more about our Order here in Ireland please visit our provincial website: Dominicans.ie. 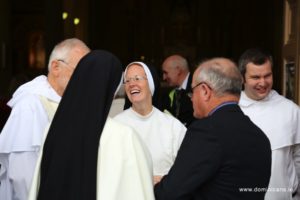 Our History in Co Louth

One of the astonishing things about the Dominican Order’s early history was its rapid growth and expansion. It was founded in 1216. St Dominic died in 1221, and the first group of Dominicans arrived in Dublin 1224. By the end of the century there were 24 foundations in Ireland. The early years of the 14th century saw the foundation of Carlingford, on the NE outpost of the Pale, the mother-house, so to speak, of the Dundalk Dominicans. It was from Carlingford that the Dominicans set sail across the bay to the district of Dundalk about the middle of the 18th century, and it was a Carlingford Dominican, fr Dominic Thomas, who established the first Dominican chapel in Dundalk in 1777.

Carlingford must have been one of the most beautifully sited of all Dominican foundations in Ireland. Possibly because of its relative inaccessibility by land, the peninsula – and especially Carlingford and Omeath, nearer the head of the fjord – remained an outpost of Gaelic culture for centuries. Omeath was a Gaeltacht area until well into the 20th century.

Although there is no definite evidence in support, 1305 is taken as the probable date of foundation.The weight of probability is also with Richard de Burgo, earl of Ulster, as the founder. All that remains of this ancient foundation are the four bleak walls of the church. It was a long narrow construction, 125 feet by 22 inside. There is evidence of a choir and nave surmounted and divided by a bell-tower. It rose on solid side-walls and ran from east to west in the traditional manner. There is only slight evidence of the priory buildings themselves. A short distance away are the remains of a water-mill and a fish-pond. From the beginning the church was dedicated to St Malachy.

All the Dominicans would have been proficient in the native language, a fact which drew unfavourable comment from official political quarters from time to time. In a memorandum written by a government official for transmission to Edward I of England, the following passage appears: “It would be expedient to the King that no Irishman should ever be an Archbishop or Bishop, because they always preach against the King, and always provide their churches with Irishmen – so that an election of bishops might be made of Irishmen to maintain their language; and not of others. In like manner the Dominicans and the Franciscans make much of that language.” In 1310 the Parliament of Kilkenny issued an edict forbidding all religious orders in Ireland to receive Irishmen into their ranks.Although this law was repealed shortly afterwards it was re-enacted in a much more vicious form in 1366. Despite this, it is certain that the Carlingford Dominicans, in common with many others, continued to receive and train novices irrespective of their race or place of birth.

From its foundation Carlingford had a school attached, probably a lecture-hall to which all might come. Lodging and maintenance were not provided except for postulants to the Order.

Information about the Carlingford priory during the next couple of centuries is almost negligible. In the background of their work and prayer was the turbulent scene of intermittent conflict with the declared policy of England in regard to the Church in Ireland. Carlingford, on the northern fringe of the Pale, was very much aware of this tension between the two sides.

The great blow fell in 1539 when Henry VIII suppressed the monasteries in England and Ireland and confiscated their property. To the occupants of religious houses who were willing to surrender their property Henry offered a pension, the acceptance of which would entail, of course, an act of submission to the Crown and the acceptance of State laws, religious and civil. So the Carlingford Dominicans, in company with many other religious communities, were simply stripped of their possessions and dispersed. Later recorded evidence reveals that they remained in the district of Carlingford, sheltered and supported by the people.

It is impossible to determine with any degree of certainty the exact fate of the priory until it fell into ruin. We know that it was used as a hall in 1543, and by the fishing fleets of the Lough for some unspecified purpose. It was also used as a barracks for Cromwell’s soldiers. It is likely that it was finally abandoned as a recognisable abode in the early years of the 18th century. It is evident from an etching that it was an ivy-covered ruin in 1793. One interesting fact emerges from the tangled web of the history of this period. It is that long after the suppression of Carlingford, and right up to the time when they moved across the bay to the district of Dundalk, the Dominicans were always know as “the Carlingford Dominicans”, indicating that their attachment to their ancient foundation was continuous and real.

Of the 38 Dominican foundations which existed before the suppression of Henry VIII only one or two remained at the end of the 16th century, and these in marshy or boggy areas. But the revival was soon under way with the easing of persecution. In 1646 there were 43 Dominican foundations and 600 friars in Ireland, but hardly a quarter of that number remained alive in Ireland and abroad ten years later. The date tells its own story. A man named Oliver Cromwell had been an unwelcome visitor in the intervening years. Yet in spite of all setbacks the Carlingford friars survived and continued to operate in the Cooley peninsula.

The name of Fr Dominic Thomas keeps recurring during the middle years of the 18thcentury, identifiable as the parish priest of Cooley, Kilcurley and Faughart. He was the man who set up the first Dominican community in Dundalk. The circumstances surrounding the arrival of the Dominicans in their present house in Dundalk are vividly described by Christina Roghan, who died in 1876 when she was about 100 years old. “[The friars] had no house or home. They slept and drank and ate whenever they got it; it as by the side of the ditch they used to says Mass. They used to be about Castletown, near the hill – it was an old ‘station’. Here it was that some of the friars said Mass. One day Lord James Hamilton saw from the demesne, in a field outside the park wall or fence, a crowd of people. He asked the steward or herd in the course of the same day why the people were there. He answered that it was one of the friars from Carliingford who was saying Mass by the side of the ditch. ‘Send him to me,’ said Lord Hamilton, ‘and tell him I will do him no harm.’ Father Thomas at first refused to go, and then after came. ‘Why,’ said Lord Hamilton, ‘had you no better place than the side of a ditch to pray? Go (said he), you have all been too long hunted and slaughtered; go home, you shall not be harmed.’ ‘I have no home that I can call my own, nor can I find one,’ said Fr Thomas. ‘Go’, said Lord Hamilton, ‘to to that barrack of a place (pointing in the direction of the present convent), there is no use now made of it,’ just beside the park gate, meaning an old linen factory which was then unoccupied. Fr Thomas converted the long shed in the yard alongside the park entrance into a chapel, and erected an altar at the end wall; and that was the first Dominican chapel in Dundalk, and by degrees it was made a more decent place of worship by Father Thomas.”

There are only very meagre references to the work of the Dominicans from the years of their first official foundation in Dundalk in 1777 until the 1830s. Fr Thomas’s life and labours I Dundalk are not recorded, nor the year of his death. All that has emerged is that he expressed a desire to be buried in Carlingford. His wishes were carried out, but the exact location of his grave has never been discovered. Most of his fifty years in the Order were spent on the run from the authorities who wielded their power from Dublin Castle. There is one precious relic that links the Priory with Fr Thomas and Carlingford. It is a silver chalice still in the priory, which was used by him while he wandered from place to place in the Cooley peninsula and Haggardstown, saying Mass in secret hide-outs, away from the scrutiny of the soldiers. The chalice bears the inscription: “Conventus S. Malachiae Carlingfordiensis, Ord. Praed. 1721”

The present Dominican church in Dundalk (1866) is the third built since the original date of 1777. It took four years to build because of scarcity of funds.

The granting of Catholic Emancipation in 1829 gave an enormous impetus to Catholic life and this was especially experienced in the field of education. The Dominicans in Dundalk had opened a small school in 1827. What is known as the Friary School developed from this. For the next 17 years this was the only school in Dundalk under the Catholic Board of Education.

A plot of ground was acquired in 1898 for the purpose of building new schools. The prior, Fr Andrew Skelly, set out to improve facilities and courses; and so we find additional subjects on the curriculum. The new schools were opened in 1900.